Various industries have always been heavily male dominated and that’s no exception in the world of wine. History tells us that wine has been a common thread among cultures, nations and religions. However, since Roman, Greek and Egyptian times, wine was traditionally a privilege for men to be involved with while women were not as included. Slowly times have changed but the gap between both sexes still exists today. That is why in 2022 IWD, we remember some of the inspiring women who made a difference and paved a way for future generations to be inspired by.

Let’s continue celebrating Women’s History Month with a glass or two of wine and remember that behind every great wine there might be a great woman!

A brief history of Women in Wine across the centuries:

Barbe-Nicole became known as the “Grande Dame of Champagne” and was a French Champagne producer in the 18th & 19th centuries. She took on her husband’s wine business when she became widowed at 27. Under her ownership, and her skill with wine, the company developed early champagne using a novel technique. The brand and company of Veuve Clicquot still bears her name today.

Antónia Adelaide Ferreira, often referred to in Portugal as “Ferreirinha”, was a Portuguese businesswoman in the 19th century. She is known for leadership in the cultivation of the famous fortified wine we know as Port as well as for the winemaking innovations she introduced to Portugal.

Sarah was born in the 1930s then went on to studying oenology at Bordeaux University. She moved to England to work and became the world’s first female Master of Wine in the 1970s. Following this glass-ceiling-shattering achievement she moved to Scotland, and opened Glasgow’s first wine warehouse.  Sarah retired in the 1990s and today, one third of the world’s MWs are female (151).

Jancis Mary Robinson OBE, ComMA, MW was born in the 1950s and is a British wine critic, journalist as well as wine writer. She currently writes a weekly column for the Financial Times, in addition to writing for her eponymous website. She has also been known to provide advice for the wine cellar of Queen Elizabeth II.

So we want to shine a light on some of our talented female winemakers and women in wine across the industry: 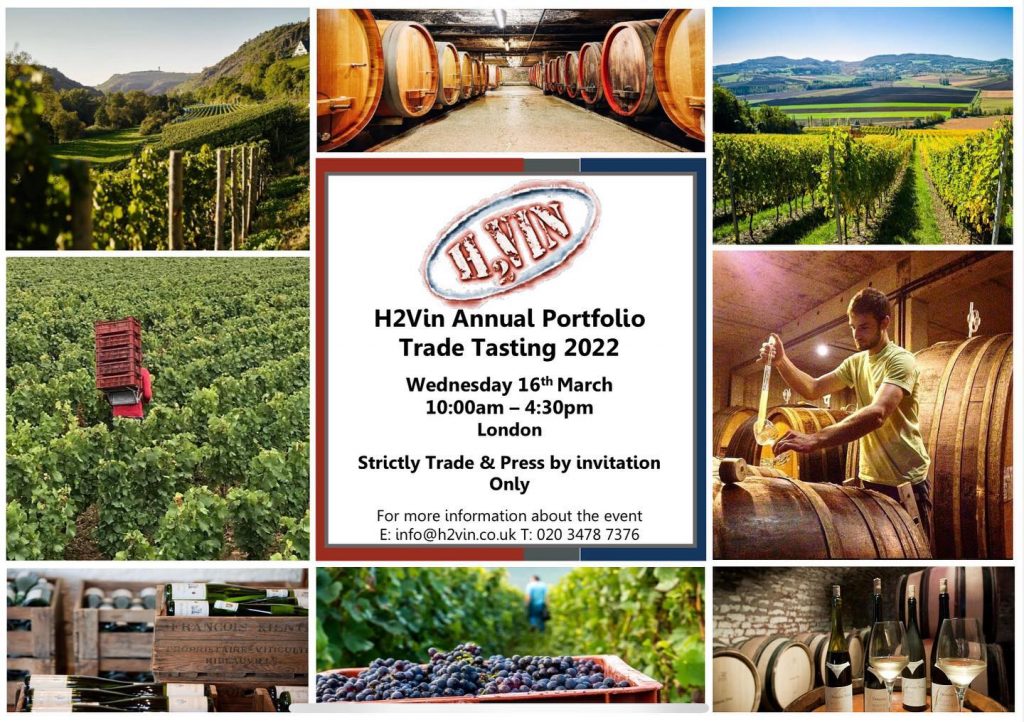 That being said, we are delighted to invite you to our Annual Trade Portfolio Tasting:

To register, please email info@h2vin.co.uk to confirm your attendance (other members of your wine team are more than welcome to RSVP as well, so please pass this invitation on to have them register too). With over 100 extraordinary wines from around the globe to discover and taste, whilst introducing you to many new vintages, new Producers and exclusive under-the-radar gems, we are extremely excited to be back on your tasting grid once again & we’re looking forward to seeing you there!

So imagine a gender equal world.

A world free of bias, stereotypes, and discrimination.

A world that is diverse, equitable, and inclusive.

A world where difference is valued and celebrated.

Together we can forge women’s equality.

Collectively we can all Break The Bias!

Whether deliberate or unconscious, bias makes it difficult for women to move ahead. Knowing that bias exists isn’t enough, action is needed to level the playing field.

Will you help break the bias?

So let’s raise our glasses to women in wine everywhere; may we meet them, may we be them, may we empower them. Cheers!